The Raven King by Nora Sakavic

Series: All for the Game #2

The Foxes are a fractured mess, but their latest disaster might be the miracle they’ve always needed to come together as a team. The one person standing in their way is Andrew, and the only one who can break through his personal barriers is Neil.

Except Andrew doesn’t give up anything for free and Neil is terrible at trusting anyone but himself. The two don’t have much time to come to terms with their situation before outside forces start tearing them apart. Riko is intent on destroying Neil’s fragile new life, and the Foxes have just become collateral damage.

Neil’s days are numbered, but he’s learning the hard way to go down fighting for what he believes in, and Neil believes in Andrew even if Andrew won’t believe in himself.

Holy fuckkkk!!! The way it gets more and more unpredictable!!! Each character has a complex backstory and the plot is keeping me on edge!

On Andrew!!! And Neil too! I wasn’t ready for the pain and hurt even though I should’ve been. Neil has gone through so much and the character development is stunning. The way he’s with Andrew, their conversations and fights are so very intriguing. I’m so invested in this series.

I love how the Foxes are finally a team but hate what happened to bring them together. Raven King picks up directly after the first book is entirely from Neil’s POV.  I just going to directly read the next book because I cannot wait!

Also Riko can burn a thousand fiery deaths in hell! I’m so mad about the things he did that I cannot even form words to describe that sadistic bastard. I better get revenge next book!

Buy It:  Amazon US | Amazon UK

The King’s Men by Nora Sakavic 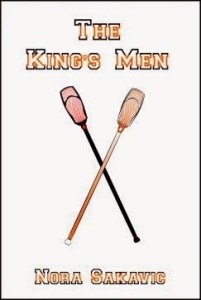 Series: All for the Game #3

Neil Josten is out of time. He knew when he came to PSU he wouldn’t survive the year, but with his death right around the corner he’s got more reasons than ever to live.

Befriending the Foxes was inadvisable. Kissing one is unthinkable. Neil should know better than to get involved with anyone this close to the end, but Andrew’s never been the easiest person to walk away from. If they both say it doesn’t mean anything, maybe Neil won’t regret losing it, but the one person Neil can’t lie to is himself.

He’s got promises to keep and a team to get to championships if he can just outrun Riko a little longer, but Riko’s not the only monster in Neil’s life. The truth might get them all killed—or be Neil’s one shot at getting out of this alive.

I love this series so fucking much! Andrew and Neil owns my heart! The romance is slow burn at it’s best and I’m going to miss every single one of the team! You cannot help but fall for all of them.

The terror I felt around the half way mark is something I cannot describe. I was trying to read as fast as possible without skipping ahead because all I wanted was for it to be over. I was so scared to realize that I didn’t trust the author to not give me even more pain and that sort of took me by surprise.

Andrew is so wonderfully protective over his loves ones and I love how his complexities are shown. And I’m so glad we finally get the revenge I was hoping for in the previous book. Also consent is sexy and I love the way it is portrayed here.

Is this really the end of the series? It’s only the first year and I can’t help want more books set in this world. Also the fanarts really made me think Renee and Allison were a couple throughout the series and now I feel clowned.🤡🤡

This series is special and will always have a place in my heart. I also think it might get better with re reads because the three are really just one long book and it’s all so intricately connected. Very highly recommended but please do heed the warnings.

“There is no ‘this’. This is nothing.”
“And I am nothing,” Neil prompted. When Andrew gestured confirmation, Neil said, “And as you’ve always said, you want nothing.”

Buy It: Amazon US | Amazon UK

I finished Golden Stage by Cang Wu Bin Bai and I'm addicted! It has the softest #danmei couple ever and the first Chinese novel I've read with a disabled MC and also a vers couple (switch). Swipe through to get art baited, official art courtesy of the 4 audiodramas and one is currently getting Eng subs on YouTube. Overall, if you love childhood friends to rivals to lovers with bickering, flirting, communication and an arranged marriage, this is one is for you! Review on blog and LINK IN BIO
Want a second chance sports romance, especially for baseball fans? Check out the review of Unwritten Rules by K D Casey, up on my blog ⚾️Link in Bio⚾️
I absolutely loved The Charm Offensive by Alison Cochrun! Highly recommend this book to everyone looking for queer take on the dating reality shows with a swoony romance, only one bed, over-the-top romantic gestures and more. Review up on blog and link in Bio
Want a sapphic witchy rom com this spooky season? Check out the review of Payback's A Witch by Lana Harper 🎃LINK IN BIO🎃
🧁Incredibly queer with tons of baking, quirky recipes and a Big Gay Texas Bakeout! Check out the review of The Heartbreak Bakery by A R Capetta if you want a heartwarming and romantic story! OUT ON OCT 12
Alexis Hall has revealed the cover for Murder Most Actual, a Kobo Original!