Ghost/god Wes Cooper and his not-life partner, vampire Hudson Rojas, have settled into cohabitation in an upscale part of Toronto. So what if their hoity-toity new neighbors haven’t exactly rolled out the welcome mat for the paranormal pair? Their PI business is booming, and when a suspect they’ve been tailing winds up in the morgue, it’s alongside a rash of other shifters in apparent drug-related fatalities.

Now Wes and Hudson must connect the dots between the shifter deaths and an uptick in brutal vampire attacks across the city. Throw in a surprise visit from Hudson’s niece—who may or may not be on the run from European paranormal police (who may or may not exist)—and guardianship of a teen shifter who might be the key to solving the whole mystery (if only she could recover her memory), and Wes and Hudson have never been busier…or happier.

But when a nightmare from Hudson’s past comes back to haunt him, their weird, little found family is pushed to the brink. Mucking this up would mean Hudson and Wes missing their second chance at happily-forever-afterlife…

I picked up some murmurs from the kitchen and remembered that we had another guest. Whom I’d been introduced to as Hudson’s friend. Yeah, that wasn’t going to fly. I pushed off the door and made my way to the kitchen, which was as gorgeous as the rest of the place—stainless steel appliances, some sort of stone countertops, with a giant island in the middle of the space that was great when we had the gang over. A modest table and chairs sat in the breakfast nook right off the kitchen, surrounded by windows that looked out onto the backyard.
Hudson and Priya were on opposite sides of the island. Priya sat on one of the stools while Hudson braced his hands on the countertop. Neither spoke and I could feel the awkwardness saturating the room. Two glasses of water sat untouched on the stone surface, so at least Hudson hadn’t completely forgotten his manners.
He straightened as I walked in. “All done?”
“Yep. Hi again, Priya.” I pasted on a fake smile that I knew he’d recognize as being fake. “Hud, can I speak to you for a minute?”
“Sure. Be right back,” he said to his niece.
I led Hudson to our home office off the kitchen and closed the door. Before I could say anything, he asked, “How was your meeting?”
“Fine,” I answered automatically, then sighed. “No, not really. Their daughter is missing.” I filled him in on the details. His expression darkened and grew downright thunderous when I got to the part about the cops being assholes.
“You’re going to look at her social media tonight? Try to track her that way?”
I arched a brow. “I have learned a few tricks over the past year, you know.”
He smiled proudly. “I know. Sorry.”
“Speaking of sorry…” I folded my arms. “Your friend?”
His grin acquired a sheepish tilt. “Yeah, I know.”
“Seriously?”
“I know!” He rubbed the bridge of his nose and let out a frustrated grunt. “I’m sorry. I haven’t come out to anyone in a long time and—”
“Your family doesn’t know?”
He scoffed. “No. Are you kidding me?”
“You came out to a department full of cops, but not your family.”
“I never see my family—I saw the cops every day.”
“But I mean…not even your brother?” I could see why he wouldn’t have rushed to come out to his father—since they didn’t have the best relationship to start with—but Lance was Hudson’s sole sibling, and his only living relative.
“I haven’t seen him since he graduated from university. He came back to Toronto for a visit.”
“When was that?”
“1992.”
I blinked at him. “You haven’t seen your brother in nearly thirty years?”
“Well…yeah. I mean, after I—” He made a pointy teeth gesture with his fingers, which was both adorable and a little heartbreaking. He still wasn’t totally comfortable with that side of himself. “Me visiting him wasn’t a good idea, and him visiting me was even worse. He sends me pictures and we call each other on holidays and birthdays.” He shrugged. “It’s enough. He’s built a life for himself in London—got married, had a kid, got divorced. It’s full, you know? He doesn’t need me in it like that.”
Jesus. I knew Hud’s childhood wasn’t golden—his mom had died when he was five and his dad had turned into an abusive drunk who went through wives like most people changed their socks. The only stepmother who’d stuck around for any length of time had been Lance’s mom. So yeah…I knew all of this, but it was still a shock to hear it and be reminded that Hudson had become the man he was despite his upbringing and not because of it.
I stepped up to Hudson, propped myself up on my tiptoes, and pressed a kiss to his lips. A gentle peck to pull him out of his thoughts and remind him that while he might have been alone for the majority of his life, he wasn’t now. 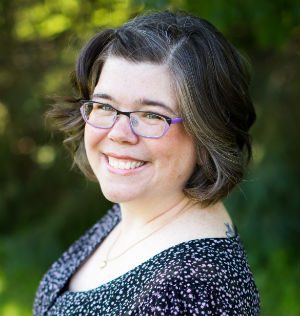 Jenn Burke has loved out-of-this-world romance since she first read about heroes and heroines kicking butt and falling in love as a preteen. Now that she’s an author, she couldn’t be happier to bring adventure, romance, and sexy times to her readers.

She’s been called a pocket-sized and puntastic Canadian on social media, and she’ll happily own that label. Jenn lives just outside of Ottawa, Ontario, with her husband and two kids, plus two dogs named after video game characters…because her geekiness knows no bounds.

Win a amazing prize package for the “Graveyard Shift” release!

One thought on “RELEASE BLITZ,REVIEW AND GIVEAWAY: Graveyard Shift by Jenn Burke”